ESA Science & Technology - Hubble Probes the Heart of a Nearby Quasar

Hubble Probes the Heart of a Nearby Quasar

Hubble Probes the Heart of a Nearby Quasar 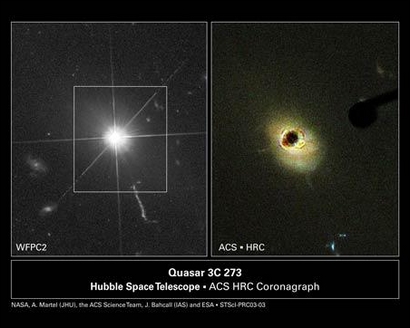 The Hubble Space Telescope's new Advanced Camera for Surveys (ACS) has provided the clearest view yet in visible light of the nearby quasar, 3C 273 [image at right]. Using the new camera's coronagraph to block the light from the brilliant central quasar, astronomers discovered that the quasar's host galaxy is significantly more complex than had been suggested in previous observations.

Features in the surrounding galaxy that are normally drowned out by the quasar's glow now show up clearly. The ACS reveals a spiral plume wound around the quasar and a red dust lane. Material in the form of a clump and a blue arc are shown in the path of a jet that was blasted from the quasar.