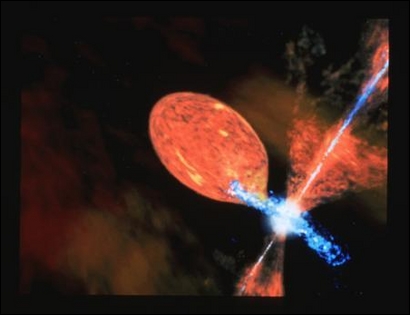 This illustration depicts one possible explanation for R Aquarii's semi-periodic outbursts. The peculiar behavior of R. Aquarii suggests that the red giant star in the R Aquarii system may spill some of its mass onto the companion - a common mechanism proposed for most nova-like outbursts. The mass transfer process may form an accretion disk: a swirling, flattened vortex of hot gasses that spiral down onto the hot companion. The disk may periodically erupt when the companion becomes overloaded with in-falling material. These explosions may happen only periodically when the white dwarf orbits close enough to pull in material from the star's outer layer.
View »
5-Feb-2023 07:33 UT

R Aquarii - A Nearby Exploding Star