Jet Structure in the Orion Nebula

Jet Structure in the Orion Nebula 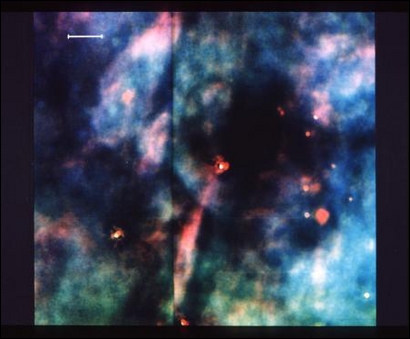 This photograph, made with the Wide Field Camera on the Hubble Space Telescope, reveals the detailed structure of a newly discovered jet of material streaming away from a young star in the Orion Nebula. While similar jets have been seen from the ground, the new observations reveal the structure of this jet with unprecedented clarity. Of particular significance is the fact that the jet is bright along its edges in the light of gaseous sulphur atoms (shown here in red). Experts believe this structure to be due to shock fronts at the boundary between the jet and the surrounding gas of the Orion Nebula.
View »
5-Feb-2023 07:05 UT