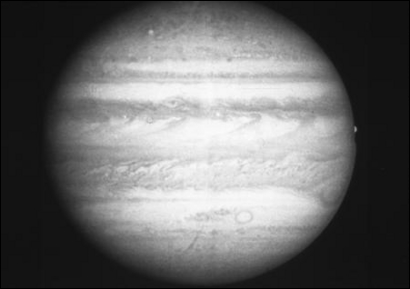 This black and white picture of Jupiter, taken in green light at 1:14 a.m. on the 11 March 1991 by the Planetary Camera on NASA's Hubble Space Telescope, shows a wealth of fine detail in the clouds that cover the planet. The Great Red Spot is seen at the lower right, also on the right near the equator the satellite Europa is disappearing behind the limb of the planet. The dark 'j' shaped clouds along the equator are the result of a pattern of intense jet streams in the Jovian atmosphere. This picture is as sharp as the Voyager pictures taken five days before the closest approach in 1979.
View »
4-Oct-2022 19:39 UT