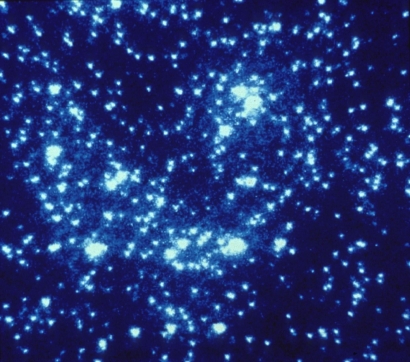 The core of the globular cluster 47 Tucanae, as imaged by the European Space Agency's Faint Object Camera (FOC) onboard NASA's Hubble Space Telescope. Space Telescope's high spatial resolution and ultraviolet sensitivity make it a powerful tool for probing the centers of globular clusters. The FOC resolves several hundred stars where ground-based images only yield a few dozen stars. At least 21 of these stars are exceptionally bright in ultraviolet light. HST's UV sensitivity and high resolution allow it to easily separate these so-called blue stragglers stars from the red giant stars which dominate the cluster.
View »
3-Oct-2022 03:57 UT