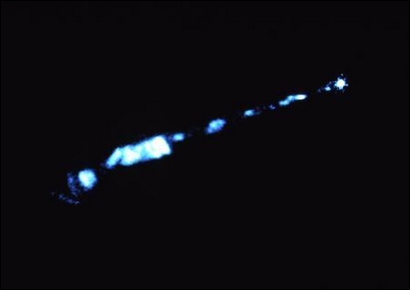 A NASA Hubble Space Telescope (HST) view of a 4,000 light-year long jet of plasma emanating from the bright nucleus of the giant elliptical galaxy M87. This ultraviolet light image was made with the European Space Agency's Faint Object Camera (FOC), one of two imaging systems aboard HST. M87 is a giant elliptical galaxy with an estimated mass of 300 billion suns.
View »
5-Oct-2022 21:32 UT