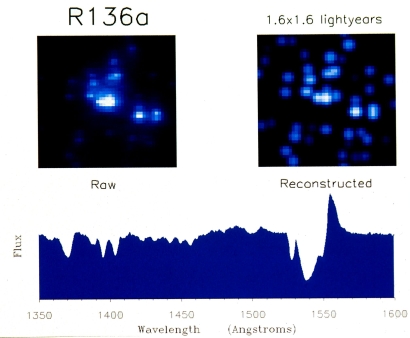 A new image processing technique has yielded the clearest view yet of an extraordinary star cluster located about 169 000 light years from Earth. The new technique, called photometric reconstruction, was applied to a photograph of the star cluster Rl36 that was obtained with the Planetary Camera onboard the NASA Hubble Space Telescope. It reveals that there are at least 47 stars located within an area 1.6 light years across in R136. (One light year is approximately 5.8 trillion miles long.) In contrast, the Sun is about 4 light years from the nearest known star, Proxima Centauri.
View »
4-Oct-2022 19:56 UT