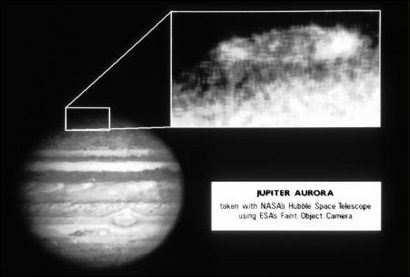 The image at top right shows Jovian aurora observed on 8 February 1992, by the European Space Agency's Faint Object Camera (FOC) aboard NASA's Hubble Space Telescope (HST). This is the first direct image of the aurora taken in ultraviolet light (1600 Angstroms) and the best auroral images ever. An earlier image of Jupiter's full disk (lower left), obtained by HST's Wide Field/Planetary Camera, shows the location of the northern aurora (box) with respect to the rest of the planet.
View »
4-Oct-2022 19:37 UT