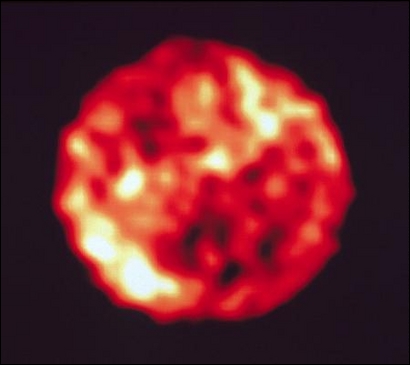 This is a Hubble Space Telescope image of the geologically active trailing hemisphere of the Jovian moon lo. The ultraviolet light image as taken with the European Space Agency's Faint Object Camera on March 15, 1992, when lo was 414 million miles from Earth.

No larger than Earth's moon, lo is so far away it is at the resolution limit of ground-based telescopes, so surface features cannot be distinguished. HST resolves features as small as 150 miles across. This level of detail is only surpassed by the Voyager probes which flew within several hundred thousand miles of lo in 1979.

Technical Information:
lo north is 123 degrees and east 33 degrees counterclockwise from the top of the print. The diameter of the satellite is 1 .l arc seconds equivalent to a diameter of 2170 miles. Resolution is 22 milliarcsec picture elements (pixels) corresponding to 43 miles per pixel on lo's surface.