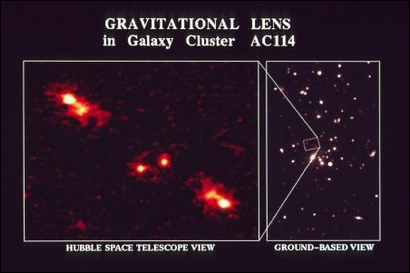 The NASA/ESA Hubble Space Telescope photograph (left) shows a pair of L-shaped images with striking mirror- symmetry. These are thought to arise from a very distant galaxy seen through a cluster of foreground galaxies (right). The gravity of the galaxy cluster acts as a natural magnifying glass, bending and focusing the light of the more distant Source into several images, each of which is apparently larger and brighter than would otherwise be the case. This rare combination of Hubble's powerful telescope mirrors and the natural telephoto lens gives astronomers unprecedented information on the nature of very distant galaxies, and on the distribution and nature of matter in the foreground cluster. The two compact objects in the center of the HST image are thought to be unrelated galaxies in the foreground cluster.

The observations were made with Hubble's Wide Field Camera in one of the first long exposures (six hours) with the orbiting observatory.

Using a Distant Gravitational Lens to Explore the Cosmos