At the heart of Hubble are a 2.4 m primary mirror and a collection of four science instruments that work across the entire optical spectrum - from infrared, through the visible, to ultraviolet light. There are two cameras, one spectrograph and a set of fine guidance sensors. 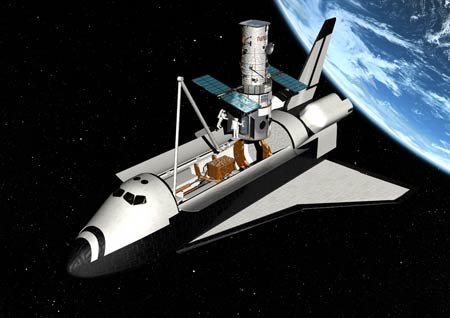 Hubble was designed to be serviced in space, thus also allowing outdated instruments to be replaced. The telescope was placed into a low-Earth orbit by the Space Shuttle (600 km altitude) and was designed using modular components so that on subsequent Shuttle missions it could be recovered and faulty or outdated parts more easily replaced before being re-released into orbit.

Power for the computers and scientific instruments onboard is provided by two 2.6 x 7.1 m solar panels. The power generated by the arrays is also used to charge six nickel-hydrogen batteries which provide power to the spacecraft for about 25 minutes per orbit while Hubble flies through the Earth's shadow.

The telescope uses an elaborate system of attitude control to improve its stability during observations. A system of reaction wheels manoeuvre the telescope into place and its position in space is monitored by gyroscopes. Fine Guidance Sensors (FGS) are used to lock onto guide stars to ensure the extremely high pointing accuracy needed to make very accurate observations.