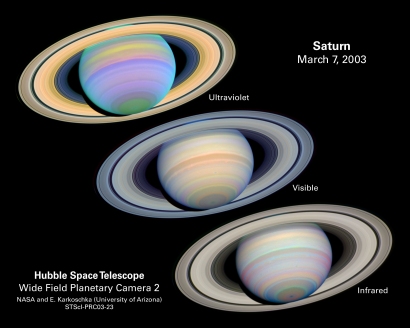 This is a series of images of Saturn, as seen at many different wavelengths, when the planet's rings were at a maximum tilt of 27 degrees toward Earth. Saturn experiences seasonal tilts away from and toward the Sun, much the same way Earth does. This happens over the course of its 29.5-year orbit. This means that approximately every 30 years, Earth observers can catch their best glimpse of Saturn's South Pole and the southern side of the planet's rings. Between March and April 2003, researchers took full advantage to study the gas giant at maximum tilt. They used NASA's Hubble Space Telescope to capture detailed images of Saturn's Southern Hemisphere and the southern face of its rings.
View »
5-Feb-2023 21:41 UT