Comparison of Ground and ACS Images of NGC 3370

Comparison of Ground and ACS Images of NGC 3370 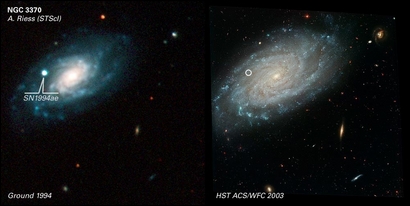 SN 1994ae was discovered by S. Van Dyk and the Leuschner Observatory Supernova Search (IAU Circular 6105) using an automated 0.76-meter telescope. The discovery image was taken on Nov. 14, 1994. The supernova was located about 30".3 west and 6".1 north of the galaxy's nucleus. The image on the left is from the 1.2-meter telescope at the Fred Lawrence Whipple Observatory (courtesy R. Schild/CfA) and was obtained in good conditions a few weeks after maximum light. The supernova peaked at ~13th magnitude in the visual. Extensive monitoring of the light curve in 5 colors was obtained beginning 2 weeks before maximum and provides one of the most complete photometric records of a supernova light curve (Riess et al. 1999).

The image on the right is from HST 9 years later, by which time the supernova can no longer be detected. Many interesting features of the host as well as other background galaxies are blurred beyond recognition by the atmosphere in the ground-based image. HST, which sits above the distorting atmosphere, captures great detail at exquisite resolution.
View »
8-Feb-2023 03:10 UT