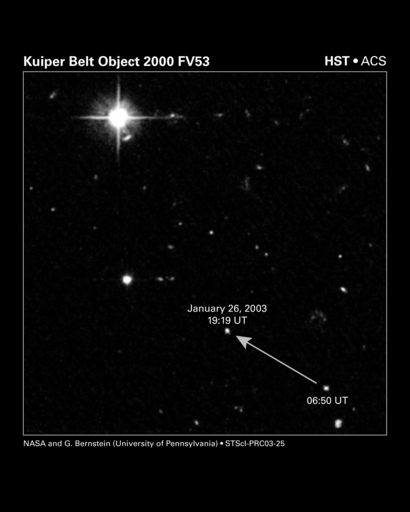 Two snapshots, taken 12 hours apart, were combined to produce this Hubble Space Telescope image of a Kuiper Belt object (named 2000 FV53) moving across the sky. Hubble's Advanced Camera for Surveys tracked the object on Jan. 26, 2003. Like all the planets, this solar-system member appears to move relative to the fixed stars and galaxies in the background. This particular object was discovered from Hawaii in March 2000 and used to help target the Hubble observations.

The three new Kuiper Belt members discovered by Hubble are up to 100 times fainter than this one. In fact, the objects are so faint that they cannot be seen by the human eye. Astronomers used computer analysis to find them. This image spans about 0.04 percent of the area of the full moon (less than 0.01 degree of the sky). Astronomers used Hubble to search an area 250 times larger than shown in this image, discovering three new solar system "fossils" as small as 15 miles (25 km) across.