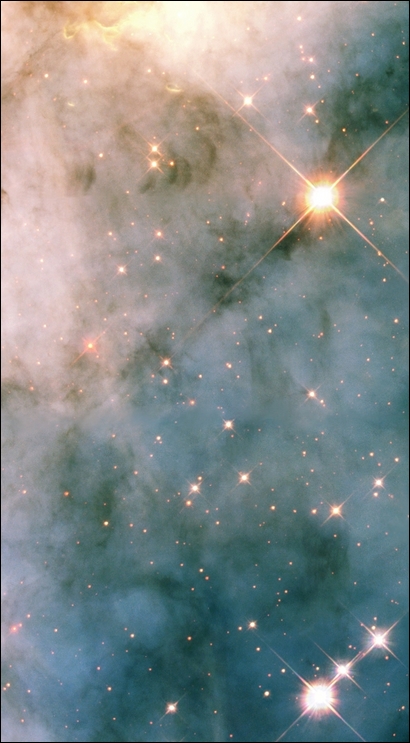 A small portion of the rough-and-tumble neighborhood of swirling dust and gas near one of the most massive and eruptive stars in our galaxy is seen in this NASA Hubble Space Telescope image. This close-up view shows only a three light-year-wide portion of the entire Carina Nebula, which has a diameter of over 200 light-years. Located 8,000 light-years from Earth, the nebula can be seen in the southern sky with the naked eye. Dramatic dark dust knots and complex structures are sculpted by the high-velocity stellar winds and high-energy radiation from the ultra-luminous variable star called Eta Carinae, or Eta Car (located outside the picture). This image shows a region in the Carina Nebula between two large clusters of some of the most massive and hottest known stars. The filamentary structure is caused by turbulence in the circumstellar gas, which in turn was caused by several stars shedding their outer layers. Cold gas mixes with hot gas, leaving a veil of denser, opaque material in the foreground. The chemical elements in the surroundings create a potential reservoir for new star formation. Areas in the brightest parts of the image at the top show elephant-trunk shaped dust clouds that may form into embryonic solar systems. This Hubble image was taken in July 2002 as part of a parallel observing program. The Hubble telescope has several instruments that can be simultaneously used to look at slightly different portions of the sky. In this case, the Space Telescope Imaging Spectrograph was used to study Eta Carinae itself, while the Wide Field Planetary Camera 2 was used to take this image of the nebulosity near Eta Car. This parallel observing mode increases Hubble's efficiency and allows astronomers to probe parts of the sky that they would not otherwise be able to investigate.
View »
7-Feb-2023 10:47 UT