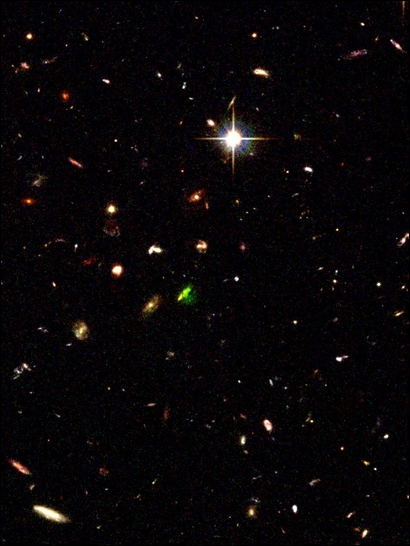 In this image astronomers are seeing an embryonic cluster as it was when the universe was 1500 million years old. The young system, called TNJ1338-1942, is the most distant known developing cluster, or proto-cluster. It is dominated by a massive 'baby galaxy' - the green object in the centre. The galaxy is producing powerful radio emissions, and is the brightest galaxy in the proto-cluster. The green colour indicates that the galaxy is emitting glowing hydrogen gas. Its clumpy appearance suggests that it is still in the process of forming. Smaller developing galaxies are scattered around the massive galaxy. The galaxy on the left of the massive galaxy is a foreground galaxy. The bright object in the upper half of the image is a foreground star.

This colour-composite image was assembled from observations taken between July 8 and 12, 2002 by the ACS Wide Field Camera.