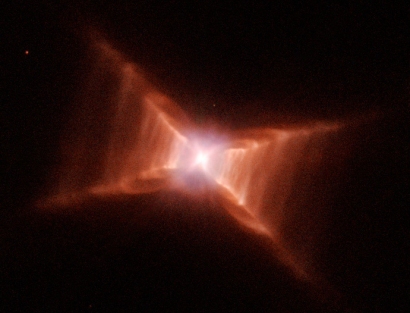 This image, taken with the NASA/ESA Hubble Space Telescope, reveals startling new details of one of the most unusual nebulae known in our Galaxy. Catalogued as HD 44179, this nebula is more commonly called the "Red Rectangle" because of its unique shape and colour as seen with ground-based telescopes.

Hubble has revealed a wealth of new features in the Red Rectangle that cannot be seen by ground-based telescopes looking through the Earth's turbulent atmosphere. Details of the Hubble study were published in the April 2004 issue of The Astronomical Journal.

The remarkable Red Rectangle: A stairway to heaven? [heic0408]