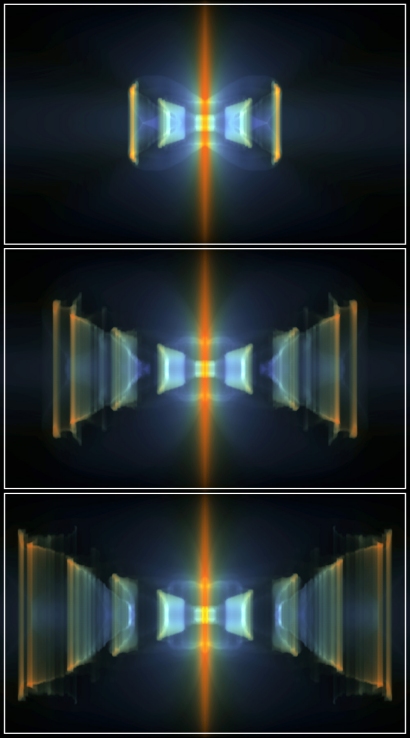 The NASA/ESA Hubble Space Telescope has revealed a wealth of new features in the Red Rectangle that cannot be seen with ground-based telescopes looking through the Earth's turbulent atmosphere. Whereas the origins of many of the features in this dying star still remain hidden, some are well explained by theorists like the Dutch scientist Vincent Icke from Leiden University in the Netherlands.

In 1981 Vincent Icke and collaborators showed that a spherical gas ejection from a dying star hitting a dust torus would give rise to shocks that can produce cone-like outflows similar to the two cones seen in the Hubble image.

Meteorologists produce weather forecasts by advanced calculations of temperatures, pressures, velocities and densities for the air masses in our atmosphere and, to some degree, theorists like Icke are doing exactly the same for objects in space. Whether modelling the weather in Earth's atmosphere or the processes in distant gaseous nebulae, scientists calculate the motion of the gas by using a complicated set of expressions known as hydrodynamic equations. This is a very demanding process, possible only on fast computers using sophisticated computer models.

Most of the matter in the Universe is in the form of gas. The weather on Earth gives rise to spectacular patterns such as thunderclouds and tornadoes in the air masses here. Likewise, the 'weather' in gas clouds in space, like the Red Rectangle, can be fascinating.

Weather prediction here on Earth is difficult enough, but in space the actual three-dimensional distribution of the gas itself is not known and there are also many local effects that may play a part in shaping the nebula, such as the distribution of the dust around the nebula and the chemistry of this dust.

Of the many different parameters in Vincent Icke's calculations, only the density of the gas and the dust are observed in the Hubble image. The reflection of the gas and dust are shown in this simulated image. The colours show what one would see in scattered light. Blue light scatters more than red (the same process that makes the sky blue and sunsets red here on Earth). The ejected blobs of gas and dust look reddish, the background nebula is whiter. The three images are a time sequence with about 600 years between and show how the Red Rectangle may have been created. Image number 3 shows a state similar to how we observe the Red Rectangle with Hubble.

The remarkable Red Rectangle: A stairway to heaven? [heic0408]