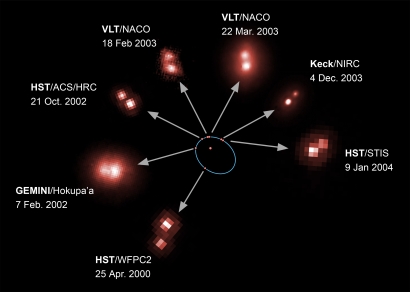 An international team of astronomers using the world's biggest telescopes have directly measured the mass of an ultra-cool brown dwarf star and its companion star for the first time. Barely the size of the planet Jupiter, the dwarf star weighs in at just 8.5 percent of the mass of our Sun. This is the first ever mass measurement of a dwarf star belonging to a new stellar class of very low mass ultra-cool dwarf stars called L-dwarfs. The observation is a major step towards our understanding of the types of objects that occupy the gap between the lightest stars and the heaviest planets.

This image shows the orbit of the brown dwarf around the ultra-cool L-dwarf. Each red dot on the orbit (in blue) corresponds to one observation made with a ground- or space-based telescope. The observations cover 60% of the whole orbit.