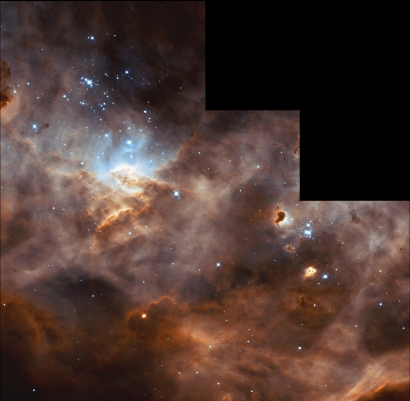 The NASA/ESA Hubble Space Telescope captures the iridescent tapestry of star birth in a neighbouring galaxy in this panoramic view of glowing gas, dark dust clouds, and young, hot stars. The star-forming region, catalogued as N11B lies in the Large Magellanic Cloud (LMC), located only 160 000 light-years from Earth. With its high resolution, the Hubble Space Telescope is able to view details of star formation in the LMC as easily as ground-based telescopes are able to observe stellar formation within our own Milky Way galaxy.

Our neighbourhood galaxy the Large Magellanic Cloud (LMC) lies in the Constellation of Dorado and is sprinkled with a number of regions harbouring recent and ongoing star formation. One of these star-forming region, N11B, is shown in this Hubble image. It is a subregion within a larger area of star formation called N11. N11 is the second largest star-forming region in LMC. It is only surpassed in the size and activity by 'the king of stellar nurseries', 30 Doradus, located at the opposite side of LMC.