The Cat's Eye Nebula's position in the sky

The Cat's Eye Nebula's position in the sky 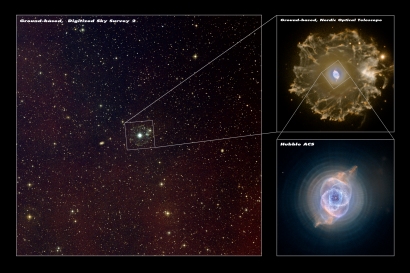 The panel is composed of three images with increased magnification. To the left is the Digitized Sky Survey 2 image spanning 1 x 1 degree. In the upper right hand corner is an image taken with the the Nordic Optical Telescope. In the lower right corner is the image taken with Hubble's Advanced Camera for Surveys (ACS).