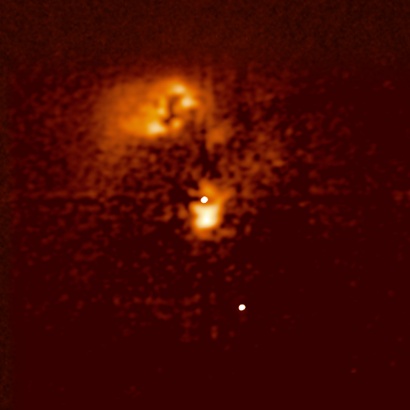 This image shows the quasar HE0450-2958 after advanced image processing known as MCS-deconvolution. Thanks to this technique, it is possible to remove the brilliant glare from the quasar itself.

The most interesting feature in the image is the nearly total absence of starlight from a host galaxy. The processing also reveal an interesting smaller cloud of gas about 2500 light-years wide, which the scientist call the blob, just next to the quasar. VLT observations show this cloud to be glowing because it is bathed in the intense radiation coming from the quasar. Most likely, it is the gas from this blob that feeds the super massive black hole, thereby allowing it to shine as a quasar.