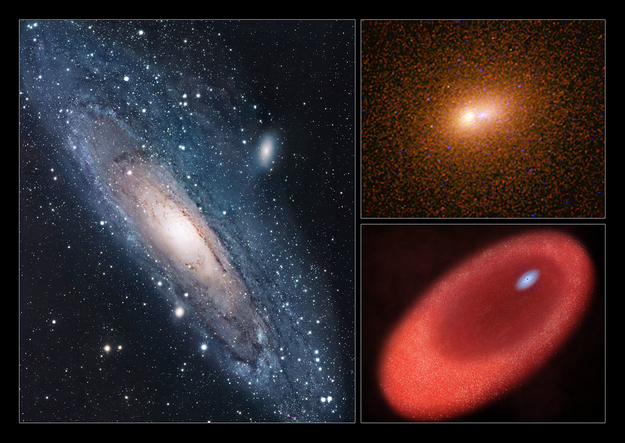 The images and illustration reveal that the Andromeda Galaxy's (M31's) core is composed of a ring of old, red stars and a newly discovered disk of young, blue stars. The disk is trapped within a supermassive black hole's gravitational field. The mass of Andromeda's monster black hole is 140 million times greater than that of our Sun.

The illustration at bottom, right shows the structure of Andromeda's unusual core and is based on Hubble images of the region. The disk of blue stars is nested inside the larger ring of red stars. The tiny black dot within the blue disk is the monster black hole.

Astronomers deduced the structure of Andromeda's core from Hubble images taken over the past decade. The image at upper, right, taken with the Wide Field and Planetary Camera 2, shows that the galaxy appears to have two cores. Normal galaxies only have one core. Astronomers now believe that Andromeda has one core. The two bright blobs are actually the ring of red stars and the disk of blue stars. In fact, the bright blob on the right has a bluish cast.

The image at left is a view of the entire Andromeda Galaxy. The active core is in the centre of the galaxy. Andromeda is 2.5 million light-years from Earth.