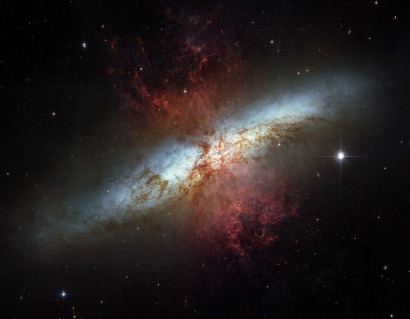 This mosaic image of the magnificent starburst galaxy, Messier 82 (M82) is the sharpest wide-angle view ever obtained of M82. It is a galaxy remarkable for its webs of shredded clouds and flame-like plumes of glowing hydrogen blasting out from its central regions where young stars are being born 10 times faster than they are inside in our Milky Way Galaxy.
26-Sep-2021 16:07 UT