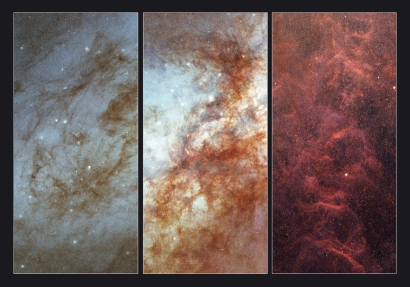 Close-up of some of the most interesting parts of the Hubble Space Telescope image of the active galaxy Messier 82 (M82).

Centre: The central portion of the galaxy shows the combined light of countless stars and reveals numerous star-forming clumps, dark red clouds of gas and dust obscuring the light from the galaxy's core, and an overall field of fainter red (cooler) and blue (hotter) stars.

Location of the Messier 82 details