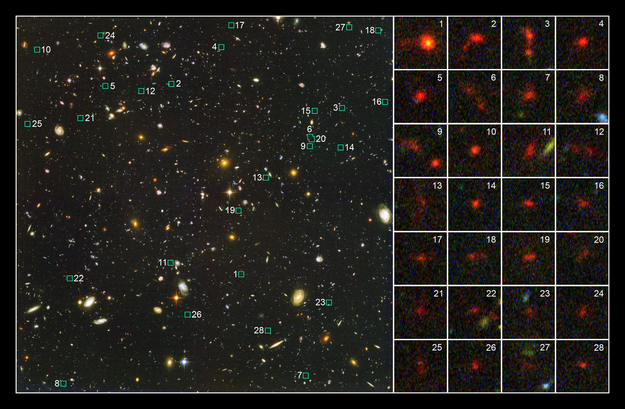 This Hubble Space Telescope image shows 28 of the more than 500 young galaxies that existed when the universe was less than 1 billion years old. The galaxies were uncovered in a study of two of the most distant surveys of the cosmos, the Hubble Ultra Deep Field (HUDF), completed in 2004, and the Great Observatories Origins Deep Survey (GOODS), made in 2003.

Just a few years ago, astronomers had not spotted any galaxies that existed significantly less than 1 billion years after the Big Bang. The galaxies spied in the HUDF and GOODS surveys are blue galaxies brimming with star birth.

The large image at left shows the Hubble Ultra Deep Field, taken by the Hubble telescope. The numbers next to the small blue boxes correspond to close-up views of 28 of the newly found galaxies at right. The galaxies in the postage-stamp size images appear red because of their tremendous distance from Earth. The blue light from their young stars took nearly 13 billion years to arrive at Earth. During the journey, the blue light was shifted to red light due to the expansion of space.