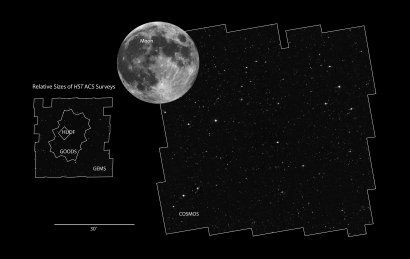 The Hubble Space Telescope has a narrow field of view, which is only a fraction of the angular diameter of the Moon. Certain research programs have devoted a substantial amount of Hubble observing time to survey comparatively larger areas of sky to address a wide range of galaxy evolution and cosmological questions. This is accomplished by assembling mosaic images taken with Hubble's cameras. These surveys constrain the star formation history of the universe, probing the faintest galaxies and tracking the origin, structure, and merger history of galaxies as they evolve.

Left: several survey fields are shown for comparison with COSMOS