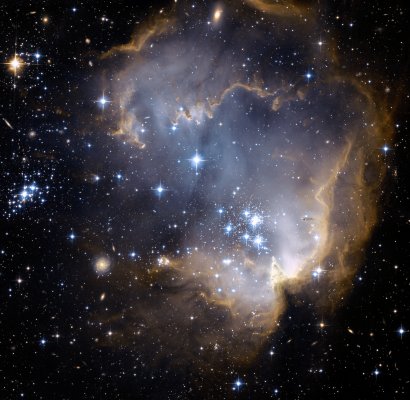 This image measures ~ 3 arcminutes across and depicts bright blue newly formed stars that are blowing a cavity in the centre of a fascinating star-forming region known as N90. The image is composed of many observations taken at different wavelengths in the visual and infrared. North is to the left.

The high energy radiation blazing out from the hot young stars in N90 is eroding the outer portions of the nebula from the inside, as the diffuse outer reaches of the nebula prevent the energetic outflows from streaming away from the cluster directly. Because N90 is located far from the central body of the Small Magellanic Cloud (SMC), numerous background galaxies in this picture can be seen, delivering a grand backdrop for the stellar newcomers. The dust in the region gives these distant galaxies a reddish-brown tint.