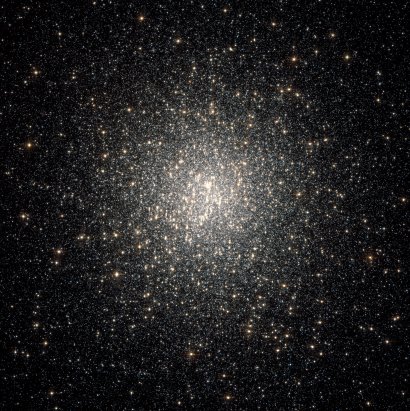 This NASA/ESA Hubble Space Telescope image shows the central region of the globular cluster NGC 2808: a dense swarm of stars.

Astronomers were surprised when Hubble spied three generations of cluster stars. The discovery is far different from the standard picture of a globular cluster's composition. For decades, astronomers thought that cluster stars formed at the same time, in the same place, and from the same material, and have co-evolved for thousands of millions of years.

Globular clusters are among the earliest settlers of our Milky Way Galaxy, born during our galaxy's formation. They are compact swarms of typically hundreds of thousands of stars held together by their mutual gravitation.

All the stars in NGC 2808 were born within 200 million years and very early in the life of the 12.5 × 109 year-old massive cluster. Of the about 150 known globular clusters in our Milky Way Galaxy, NGC 2808 is one of the most massive, with a total mass of more than 1 million times the mass of the Sun.

The sharp resolution of Hubble's Advanced Camera for Surveys measured the brightness and colours of the cluster stars to find the three stellar populations.