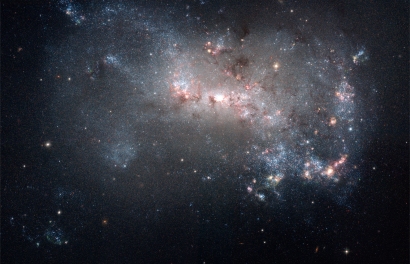 This composite image of NGC 4449 is built from data obtained by multiple observations with the Advanced Camera for Surveys (ACS) onboard HST. The ACS observations were made through three broad band filters around 435 nm, 555 nm and 814 nm, plus a narrow filter at 658 nm (Hα + [N II]).

The composite view shows hundreds of thousands of vibrant blue and red stars in the galaxy NGC 4449. Hot bluish white clusters of massive stars are scattered throughout the galaxy, interspersed with numerous dustier reddish regions of current star formation. Massive dark clouds of gas and dust are silhouetted against the bright starlit background.