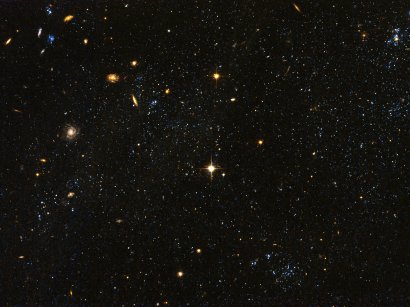 A Hubble Space Telescope visible light image of bright blue star clusters found along a wispy bridge of gas that was tidally stretched between the two galaxies M81 and M82, and a third companion galaxy not seen in this picture. This is not the place astronomers expect to find star clusters because the density of gas is so low. Turbulence in the gas may have enhanced the density locally to trigger starbirth. The so-called "blue blobs" are clumped together in a structure called Arp's Loop. Hubble reveals the clusters contain the equivalent of five Orion Nebulae. Analysis of the stellar population in the clusters yields an age of approximately 200 million years, which coincides with the epoch of the last encounter.
View »
14-Aug-2022 04:05 UT