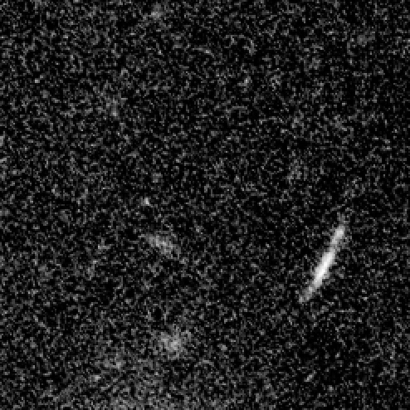 The massive cluster of galaxies Abell 1689 acts as a gravitational lens, bending and magnifying the light of the galaxies located far behind it. The faraway galaxies appear as arc-shaped objects around the cluster (for example in lower right part of this image, with the cluster of galaxies falling outside this close-up view). The increased magnification allows astronomers to study remote galaxies in greater detail.

This ACS image is centred on one of the most distant and youngest galaxies discovered to date: A1689-zD1. The galaxy is so distant it does not show up in this optical-light image, because its light is stretched to infrared wavelengths by the Universe's expansion. Instead Hubble's Near Infrared Camera and Multi-Object Spectrometer was used to reveal the distant galaxy in detail (see related images).