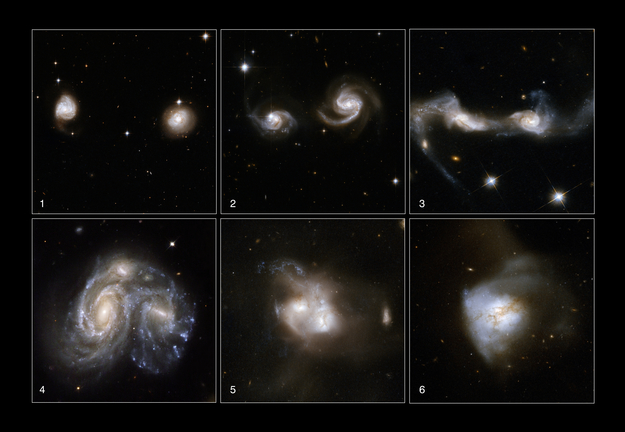 These images show 6 different snapshots of galaxies at different stages of merging. It takes hundreds of millions of years for one merger to complete, so the individual stages are illustrated with different images from fifty nine new images of colliding galaxies that make up the largest collection of Hubble images ever released together. As this astonishing Hubble atlas of interacting galaxies illustrates, galaxy collisions produce a remarkable variety of intricate structures.

Most of the 59 new Hubble images are part of a large investigation of luminous and ultraluminous infrared galaxies called the GOALS project (Great Observatories All-sky LIRG Survey). This survey combines observations from Hubble, the NASA Spitzer Space Observatory, the NASA Chandra X-Ray Observatory and NASA Galaxy Explorer. The Hubble observations are led by Professor Aaron S. Evans from the University of Virginia and the National Radio Astronomy Observatory (USA).