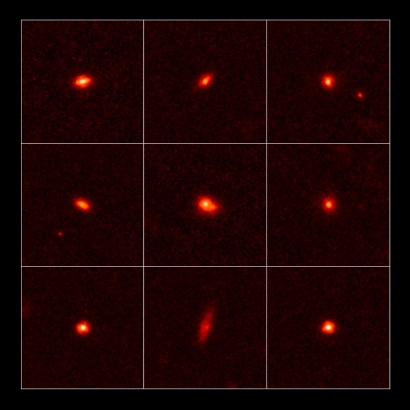 The galaxies are only 5000 light-years across and yet are 200 thousand million times more massive than the Sun. They are a fraction of the size of today's grownup galaxies but contain the same number of stars. Each galaxy could fit inside the central hub of our Milky Way Galaxy.

Hubble's Near Infrared Camera and Multi-Object Spectrometer (NICMOS) snapped these images between June 2006 and June 2007 with a wideband filter around 1.6 μm (F160W). The nine galaxies are: