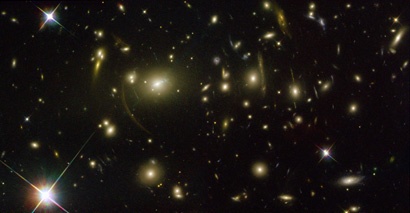 Located 2.7 billion light-years from the Earth (redshift 0.23), Abell 2390 is located in the constellation Pegasus. The large arcs seen around the central cluster are distortions of other objects located behind Abell 2390, the light from which is bent and magnified as it passes by the galaxy cluster. When a massive galaxy cluster acts as a lens, like in these new Hubble images, arcs and arclets of light are formed. The images come in different sizes and shapes depending on how distant they are from us and each other and how close the source light passes by the galaxy cluster itself. The extent to which the image is distorted and the number of copies of the background object created depend on the alignment between the galaxy cluster and the distant body.
View »
31-Jan-2023 14:29 UT