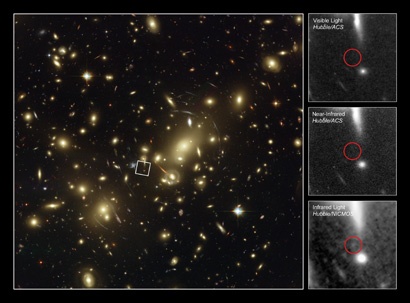 The central picture shows Abell 2218, a rich galaxy cluster composed of thousands of individual galaxies. It sits about 2.1 billion light-years from the Earth (redshift 0.17) in the northern constellation of Draco. When used by astronomers as a powerful gravitational lens to magnify distant galaxies, the cluster allows them to peer far into the Universe. However, it not only magnifies the images of hidden galaxies, but also distorts them into long, thin arcs.

Several arcs in the image can be studied in detail thanks to Hubble's sharp vision. Multiple distorted images of the same galaxies can be identified by comparing the shape of the galaxies and their colour. In addition to the giant arcs, many smaller arclets have been identified.

The pictures along the right edge show one of the galaxies viewed at approximately redshift 7.5 with the help of the gravitational lens. The galaxy cannot be seen in the top image, which was taken in the visual range by ACS. In the middle image, taken in the near-infrared by ACS, the galaxy becomes barely visible in the circled region. The galaxy finally becomes fully visible in the bottom image, which is taken by NICMOS in the infrared.