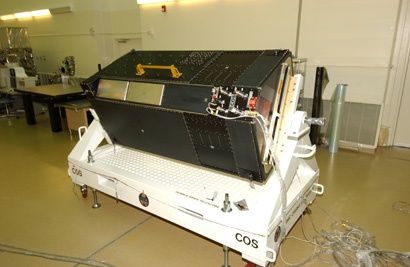 The Cosmic Origins Spectrograph (COS) will be installed on the Hubble Space Telescope during Servicing Mission 4.

COS is designed to study the large-scale structure of the universe and how galaxies, stars and planets formed and evolved. It will help determine how elements needed for life, such as carbon and iron, first formed and how their abundances have increased over the lifetime of the universe.

The light-sensing detectors of both channels are designed around thin micro-channel plates comprising thousands of tiny curved glass tubes, all aligned in the same direction.

COS will be installed in the instrument bay currently occupied by COSTAR, the set of corrector mirrors on deployable arms that provided corrected light beams to the first generation of Hubble instruments after SM1 in 1993.

COS pages at NASA