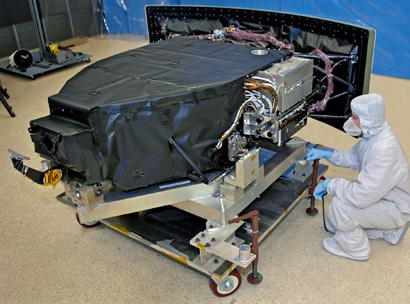 The Wide Field Camera 3 (WFC3) will be installed on the Hubble Space Telescope during Servicing Mission 4.

WFC3 will study a diverse range of objects and phenomena, from young and extremely distant galaxies, to nearby stellar systems, to objects within our very own solar system.

WFC3 extends Hubble's capability by providing wide-field imagery spanning wavelengths from the ultraviolet, through visible/optical, and into the near infrared. This wide-field "panchromatic" coverage is a unique feature of this camera. In addition, WFC3's ability to create crisp images of infrared sources makes it a steppingstone to NASA's James Webb Space Telescope, Hubble's successor planned for launch next decade.

The WFC3 is configured as a two-channel instrument. Its wide wavelength coverage with high efficiency is made possible by this dual-channel design using two detector technologies. The light-sensing detectors in both the Ultraviolet-Visible (UVIS) and Near-Infrared (NIR) channels are solid-state devices. For the UVIS channel a large format Charge Coupled Device (CCD) is used. In the NIR detector the crystalline photosensitive surface is composed of mercury, cadmium and tellurium (HgCdTe).

WFC3 will take the place of Wide Field Planetary Camera 2, which astronauts will bring back to Earth aboard the shuttle.