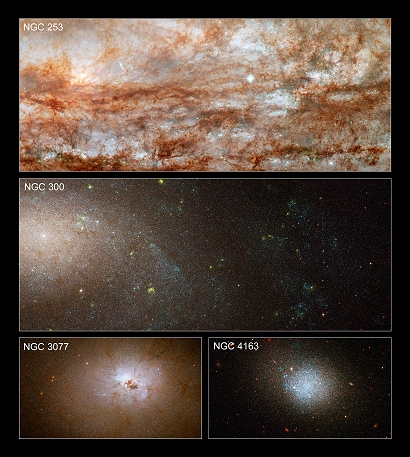 These images taken with the NASA/ESA Hubble Space Telescope are close-up views of four galaxies from a large survey of nearby galaxies.

The galaxies have very different masses and sizes and showcase the diversity found in the ANGST study. Although the galaxies are separated by many light-years, they are presented as if they are all at the same distance to show their relative sizes.

The images, taken with Hubble's Advanced Camera for Surveys, reveal rich detail in the stellar populations and in the interstellar dust scattered between the stars. Hubble's sharp views reveal the colours and brightness of individual stars, which astronomers used to derive the history of star formation in each galaxy.

In the composite image at the top, NGC 253 is ablaze with the light from thousands of young, blue stars. The spiral galaxy is undergoing intense star formation. The image demonstrates the sharp "eye" of the Advanced Camera, which resolved individual stars. The dark filaments are clouds of dust and gas. NGC 253 is the dominant galaxy in the Sculptor Group of galaxies and it resides about 13 million light-years from Earth.

In the view of the spiral galaxy NGC 300, second from top, young, blue stars are concentrated in spiral arms that sweep diagonally through the image. The yellow blobs are glowing hot gas that has been heated by radiation from the nearest young, blue stars. NGC 300 is a member of the Sculptor Group of galaxies and it is located 7 million light-years away.

The dark clumps of material scattered around the bright nucleus of NGC 3077, the small, dense galaxy at bottom, left, are pieces of wreckage from the galaxy's interactions with its larger neighbours. NGC 3077 is a member of the M81 group of galaxies and it resides 12.5 million light-years from Earth.

The image at bottom, right, shows a swarm of young, blue stars in the diffuse dwarf irregular galaxy NGC 4163. NGC 4163 is a member of a group of dwarf galaxies near our Milky Way and is located roughly 10 million light-years away.