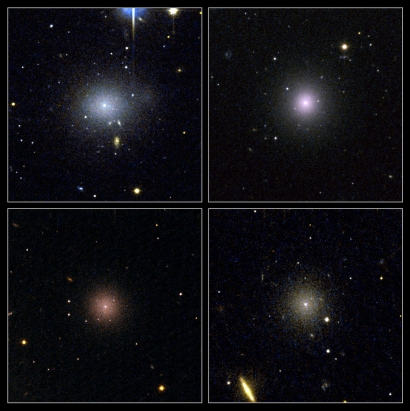 These four dwarf galaxies are part of a census of small galaxies in the tumultuous heart of the nearby Perseus galaxy cluster.

The images, taken by NASA/ESA's Hubble Space Telescope, are evidence that the undisturbed galaxies are enshrouded by a "cushion" of dark matter, which protects them from their rough-and-tumble neighbourhood.

Dark matter is an invisible form of matter that accounts for most of the Universe's mass. Astronomers have deduced the existence of dark matter by observing its gravitational influence on normal matter, consisting of stars, gas, and dust.

Observations by Hubble's Advanced Camera for Surveys spotted 29 dwarf elliptical galaxies in the Perseus Cluster, located 250 million light-years away and one of the closest galaxy clusters to Earth. Of those galaxies, 17 are new discoveries.