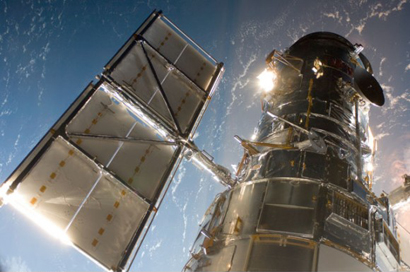 The Space shuttle Atlantis carrying 7 crew successfully lifted off at 20:01 CEST (14:01 EDT) on 11 May 2009, beginning the STS-125 mission to service NASA's Hubble Space Telescope. On 13 May the shuttle robotic arm was used to capture the space telescope after which it was lowered into a special cradle, called the Flight Support System, or FSS, in Atlantis' payload bay. The telescope remains latched to the FSS for the duration of the servicing work. An umbilical adjacent to the rotating FSS is remotely connected to provide electrical power from Atlantis to the telescope. This photo of the Hubble Space Telescope was taken shortly after capture with the robotic arm.
View »
30-Sep-2022 00:56 UT