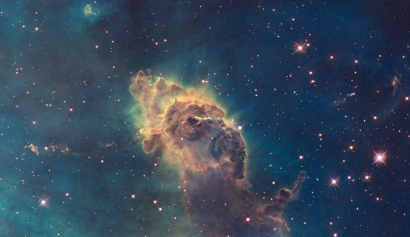 Taken in visible light, the image shows the tip of the three-light-year-long pillar, bathed in the glow of light from hot, massive stars off the top of the image. Scorching radiation and fast winds (streams of charged particles) from these stars are sculpting the pillar and causing new stars to form within it. Streamers of gas and dust can be seen flowing off the top of the structure.