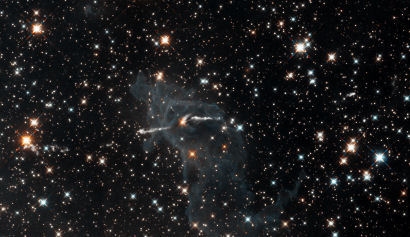 Taken in infrared light, the image shows the dense column and the surrounding greenish-coloured gas all but disappear. Only a faint outline of the pillar remains. By penetrating the wall of gas and dust, the infrared vision of WFC3 reveals the infant star that is probably blasting the jet. Part of the jet nearest the star is more prominent in this view. These features can be seen because infrared light, unlike visible light, can pass through the dust.