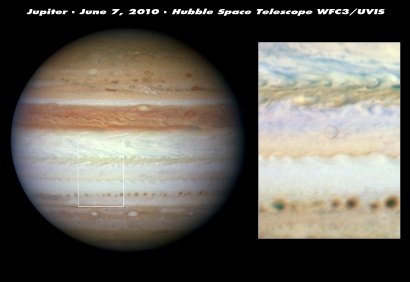 Detailed observations made by the NASA/ESA Hubble Space Telescope have led researchers to believe that the flash of light seen on Jupiter on 3 June was a meteor. This visitor from space did not plunge deep enough into the atmosphere to explode and leave behind any telltale cloud of debris, as seen in previous Jupiter collisions.

Hubble's sharp vision and ultraviolet sensitivity were used to seek out any trace evidence of the aftermath of the cosmic collision (right inset). Images taken on 7 June show no sign of dark debris above Jupiter's cloud tops. This means that the object didn't descend beneath the clouds and explode as a fireball. If it had, dark sooty blast debris would have been ejected and would have subsequently settled down onto the cloud tops.

Australian amateur astronomer Anthony Wesley first saw the flash at 22:31 CEST on 3 June. He was watching a live video feed of Jupiter from his telescope. In the Philippines, amateur astronomer Chris Go confirmed that he had simultaneously recorded the transitory event on video.