A cosmic concoction in NGC 2467

A cosmic concoction in NGC 2467 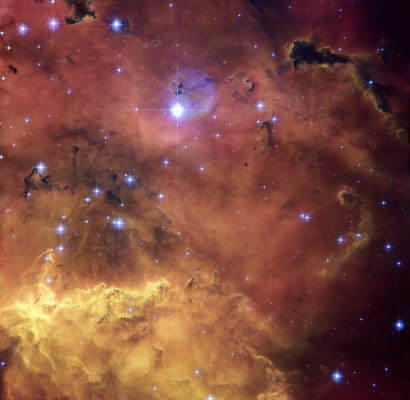 A colourful star-forming region is featured in this stunning new NASA/ESA Hubble Space Telescope image of NGC 2467. Looking like a roiling cauldron of some exotic cosmic brew, huge clouds of gas and dust are sprinkled with bright blue, hot young stars.

Strangely shaped dust clouds, resembling spilled liquids, are silhouetted against a colourful background of glowing gas. Like the familiar Orion Nebula, NGC 2467 is a huge cloud of gas - mostly hydrogen - that serves as an incubator for new stars.

This picture was created from images taken with the Wide Field Channel of the Advanced Camera for Surveys through three different filters (F550M, F660N and F658N, shown in blue, green and red respectively). These filters were selected to let through different colours of red and yellow light arising from different elements in the gas. The total aggregate exposure time was about 2000 seconds and the field of view is about 3.5 arcminutes across. These data were taken in 2004.