ESA Science & Technology - The morphology of asteroid P/2010 A2 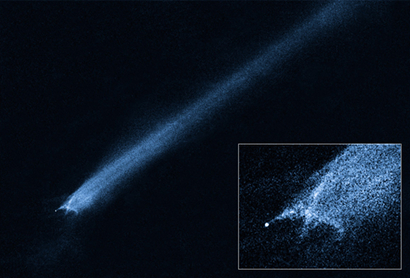 A Hubble Space Telescope image of the asteroid P/2010 A2, taken with the Wide Field Camera 3 (WFC3).

The picture highlights the object's peculiar morphology: a long and thin tail, with parallel sides, which is slightly detached from the nucleus (the bright dot visible in the inset) and comprises a curiously X-shaped filamentary structure.

These and further observations confirmed that this bizarre object is the remnant of an asteroid collision that occurred around 10 February 2009.