Wide-field image of the area around the Meathook Galaxy

Wide-field image of the area around the Meathook Galaxy 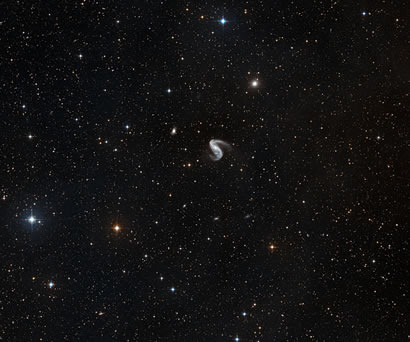 This picture of the Meathook Galaxy (NGC 2442) was taken by the Wide Field Imager on the MPG/ESO 2.2-metre telescope at La Silla, Chile. It shows a much broader view than the Hubble image, although less detailed. This view includes the whole galaxy and the surrounding sky, and clearly shows the asymmetric spiral arms. The longer of the two arms has intense star formation, which is visible here as a pink glow: this is due to the radiation of young stars ionising the gas they form from. The asymmetric shape and star formation are both thought to be caused by tidal disruptions from a near-miss with another galaxy at some point in its history.
View »
14-Aug-2022 09:35 UT