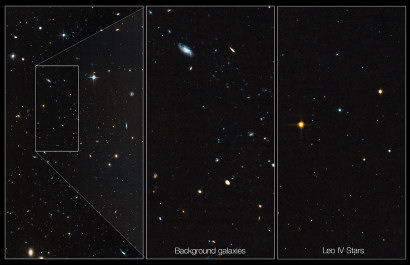 The image at left shows part of the galaxy, outlined by the white rectangular box. The box measures 83 light-years wide by 163 light-years long. The few stars in Leo IV are lost amid neighboring stars and distant galaxies.

A close-up view of the background galaxies within the box is shown in the middle image.

The image at right shows only the stars in Leo IV. The galaxy, which contains several thousand stars, is composed of Sun-like stars, fainter, red dwarf stars, and some red giant stars brighter than the Sun. Astronomers discovered Leo IV in Sloan Digital Sky Survey images by spotting a region where a clump of stars was huddled closer together than stars in areas around it.

Residing 500 000 light-years from Earth, Leo IV is one of more than a dozen ultra-faint dwarf galaxies found lurking around our Milky Way galaxy. These galaxies are dominated by dark matter, an invisible substance that makes up the bulk of the Universe’s mass.