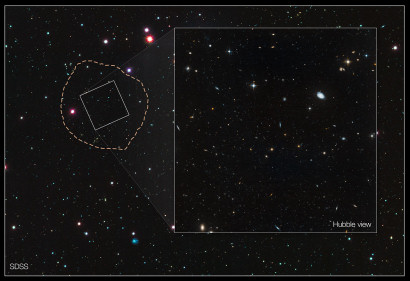 These images reveal the small and faint star-starved dwarf galaxy, Leo IV, a close neighbour of our Milky Way galaxy.

Leo IV is one of more than a dozen ultra-faint dwarf galaxies found lurking around the Milky Way. These galaxies are dominated by dark matter, an invisible substance that makes up the bulk of the universe's mass.

The wide image, taken by the Sloan Digital Sky Survey, is a view of Leo IV and the surrounding neighbourhood. The galaxy resides 500 000 light-years from Earth. The dotted line marks the galaxy's boundaries, measuring about 1100 light-years wide. The small white box outlines the Hubble Space Telescope's view.

Leo IV has so few stars, roughly several thousand, that astronomers had difficulty identifying it as a galaxy. Astronomers discovered Leo IV in Sloan Digital Sky Survey images by spotting a region where a clump of stars was huddled closer together than stars in areas around it. The dwarf galaxy is composed of Sun-like stars, fainter, red dwarf stars, and some red giant stars brighter than the Sun.

Hubble's close-up view is shown in the inset at right, measuring 483 light-years wide. Astronomers used Hubble to measure the ages of the stars in Leo IV and two other ultra-faint dwarf galaxies.

The measurements revealed that the stars in all three galaxies are more than 13 billion years old, almost as old as the 13.7-billion-year-old universe. Because the stars in these galaxies are so ancient and share the same age, astronomers suggest that a global event, such as reionisation, shut down star formation in them.

Reionisation is a transitional phase in the early universe when the first stars burned off a fog of cold hydrogen.

The Hubble image is a composite of exposures taken in January 2012 by the Advanced Camera for Surveys.