A swarm of dark matter around the Milky Way

A swarm of dark matter around the Milky Way 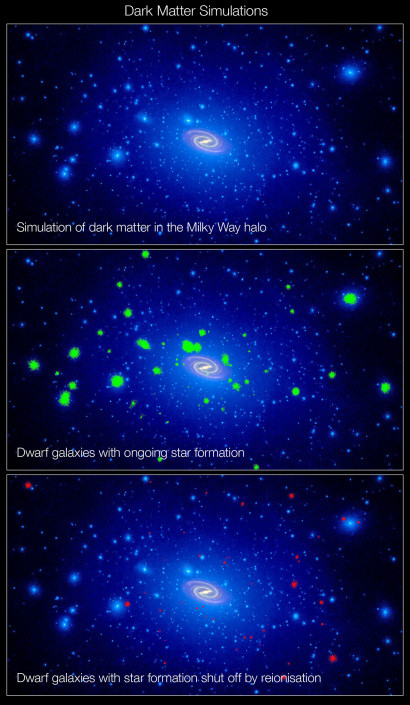 These illustrations, taken from computer simulations, show a swarm of dark matter clumps around our Milky Way galaxy. Some of the dark-matter concentrations are massive enough to spark star formation. Dark matter is an invisible substance that accounts for most of the universe's mass.

In the first panel, thousands of clumps of dark matter coexist with our Milky Way galaxy, shown in the center.

The green blobs in the second panel are those dark-matter chunks massive enough to obtain gas from the intergalactic medium and trigger ongoing star formation, eventually creating dwarf galaxies.

In the third panel, the red blobs are ultra-faint dwarf galaxies that stopped forming stars long ago. New Hubble Space Telescope observations of three of the puny galaxies reveal that star-making in these faint galaxies shut down more than 13 billion years ago.

Popular theory predicts that most of the Milky Way's satellites contain few, if any, stars and are instead dominated by dark matter. More than a dozen small-fry galaxies have been found so far, all by the Sloan Digital Sky Survey, which scanned just a quarter of the sky.